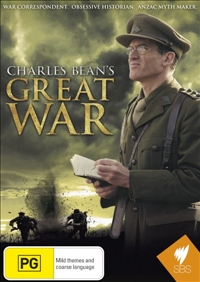 Charles Bean, angry old man, ace reporter, obsessive nerd and reluctant myth maker; tells us all about his remarkable life. From the playing fields of England and via the Australian outback, Charles Bean found himself thrown violently into the abattoir of the Great War. He wrote the truth and they thought he created a myth, because he loved Australia the way most people love another person and, as so often happens in love, Australia let him down.

‘His life is retold with admirable artistry and succinctness through terrific understated narration, (provided by Nadine Garner); and excellent re-enactments. The result is a wonderfully compact, complex and textured examination of one of the most quietly influential men in Australian history.’ — Critic's Choice, Pick of the Week, Sunday Age

I always found Charles Bean interesting, but the more I found out about him, I began to find him oddly attractive.

He was a nerdy man, a classical scholar, beaky, with wire rimmed spectacles. He was gangly and thin and obsessive. A pelican of a man all elbows and knees. He had a ferocious work ethic. He was brave; physically when it was necessary, and mentally where it mattered.

He was born a year before Ned Kelly was hanged, and he died during the Apollo space program. I doubt we will see a human lifetime of such change like that again. In his later years, he had the wisdom, anger and disappointment of man who had passed from the Victorian, to the Modern world.

‘It’s a wonderful story told with grace, quiet humour, and a great deal of cinematic skill. Fimeri delivers an elegiac and thoroughly arresting portrait of one of our great writers. As he always does, Fimeri works in a kind of speculative reverie; always alert for what literary critic Peter Steele, writing about biography, once called ‘riddle, quizzicality and quirk’. And like a biographer, Fimeri sees his job as winkling out the truth: one of interpretation, selection and conjuring a terrific story.’ — The Australian

At a time when we find such sentiments questionable, Charles Bean stood clearly as a nationalist and a patriot. But above all, he was a humanist. He believed in these things without wrapping himself in the flag or holding extreme political views. He believed we should be citizens not consumers, and he thought far into the future about the potential of the world to be a better place.

Charles Bean never made any money. He wasn’t poor but he had to work, and work hard for his living as a freelance writer. His books never sold especially well. After a lifetime of astonishingly hard work they offered him a Knighthood. He said no. He said it was a system that encouraged false values in our society. He didn’t want to be a part of that system, and this is something very attractive in him. He was man of strong principles. Most of us like to think we are, but most of us will never be tested in our principles. Charles Bean only had to say yes to the Knighthood, it would have been a well deserved and due honour, but he turned it down. He said privately, he couldn't see his wife going down to the butchers and asking for the sausages for Sir Charles Bean.

Charles Bean glimpsed a new society in the men ascending the slopes of Gallipoli and in the fields of France. He thought these men would return home and build a bold new democratic civilisation in cities with broad streets shaded by tall gums. Their rivers would flow and be clear, their children would stand upright in the sun and read books in state schools dedicated to producing men and women who were free thinkers and who loved truth.

In his eyes, it never happened. ‘We could have achieved almost anything,’ he said, ‘we abandoned our youth to the mercy, too often, of political and industrial crooks, wreckers of every fine ideal. We failed, failed wretchedly.’

This is a portrait of Charles Bean and I hope you agree, a rather interesting, oddly attractive man.