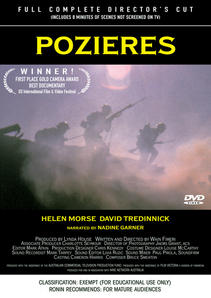 Pozieres is a tiny and unremarkable village in Northern France. In 1916 during the Great War, Pozieres becomes the site of an insane battle. The village will be captured by Australians, and they will suffer 23,000 casualties for this tiny patch of Earth. Things were ready to never be the same again.

Pozieres was like a stone thrown violently into a pool that was the consciousness of a nation. The ripples spread outwards from the tiny French village to the homes and hearts of those who endured, suffered and lost. Pozieres is an Australian story, and a twentieth Century tragedy.

This film takes the viewer back in time. Our camera finds young men in the fields and trenches of France, railway carriages in Egypt, and the beautiful Australian bush.

We meet their families in the parlours of small cottages, and rowdy public meetings in Australia.

All of the people you will meet are real. All of their words are taken from letters and diaries written at the time. Everyone is touched in some way by this tiny village, and eighty-four years later, we go back to Pozieres to find out, was it all worth anything.

‘It is a masterpiece, pulling off the remarkable achievement of instilling a tragically humanised reality into a distant war and a near forgotten tragedy.’ Marrying newsreel footage, photographs,a brilliantly researched narration and finely acted vignette style re creation of soldiers at the Western Front and their loved ones at home, this moving documentary offers viewers a real taste of a ridiculous battle. This is a great film.’ — The Herald Sun

‘Gone are the days of dull, staid documentaries. Today, the good ones rival film for creative storytelling and presentation. One such documentary is Pozieres.’ — West Australian

My Grandmother’s middle name was Pozieres. When I was a kid, the name intrigued me. Nobody else had a name so foreign. It didn't even sound like a name. What was Pozieres?

My Grandmother was born just after the Great War. A war where one in three young Australians who volunteered to fight were to be killed or maimed. My Grandmother was named after the village of Pozieres, a tiny place, a farming hamlet amidst a rolling sea of wheat and corn in the gentle Somme Valley in Northern France. Pozieres is unknown to most Australians though in 1916, while trying to capture the village, twenty three thousand Australians are killed or maimed in an area about the size of a big suburban shopping centre. For the generation who went, and those who didn’t, Pozieres the place and the name, becomes a symbol of hell on earth. In the taking of Pozieres, Australian troops will earn a reputation for ferocity and commit acts of murder.

Their faith in British Command and regard for British society are severely damaged and never recover. Relations between the British and Australian Governments are strained. The shocking loss of life will commit the Australian Government to introducing Conscription. Bitter divisions over this issue will tear Australian society apart and split the Church into sectarian factions. The Australian political scene is forever altered. Things will never be the same after Pozieres. It’s important to me to tell Australian stories. Pozieres is our story, but it's also a story with a common humanity. A story about savagery and love, futility and purpose, triumph and tragedy. It's a story for everyone.

‘Pozieres is a remarkable docudrama that takes us to the tiny village of Pozieres in Northern France, drenched with Australian blood in 1916 during one of the bloodiest battles of the Western Front. Australia suffered 23,000 casualties - the 1st Australian Division lost 5,000 men in three days and Pozieres was turned to powder and blown away. The style of Pozieres brings to life a well-worn historical subject for a contemporary television audience. Scripted and narrated in the present tense, using diggers personal letters and diaries, the camera takes us on a journey from the point of view of ‘witnesses’ to the tragedy and the horror of war. Using this inventive camera style, diggers are interviewed and questioned about their experiences before and after battle, filmed as though they are protagonists for our nightly news. It’s an honest account of both fear and bravery.’ — NSW Premier’s History Awards

Available on DVD from Ronin Films