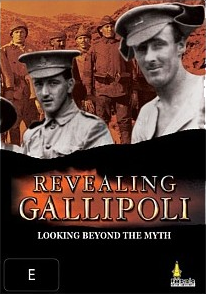 The Dardanelles in Turkey is a narrow stretch of sea twisting from the Aegean to the Sea of Marmara. The line between Europe and Asia. The crossroads of the world. In 1915 the armies of three Empires gather at the Gallipoli Peninsula, the key to the Dardanelles. They fight a battle. 450,000 men are killed or wounded. Almost nothing is accomplished.

‘The tone is poetic and elegiac. A complex appropriately brooding meditation about nationhood, morality, loss and politics. Fimeri works with a poetic restraint, he builds a rhythm that is the heartbeat of the experience, a kind of stream of consciousness in which one image, or thought, evokes another in the patch of tortured land where the legends began.’ — The Australian

Five broadcasters from across the globe united to tell the tragic story of Gallipoli. December Films in association with ABC TV, Turkish Radio and Television, TVNZ (New Zealand), S4C, S4C International (Wales) and RTE (Ireland). Developed with the assistance of the Australian Film Commission and Film Victoria. Produced with the assistance of S4C, Film Finance Corporation Australia and Film Victoria.

It is a story of astonishing courage, bitter fortitude, and heartbreaking failure. For the first time, Revealing Gallipoli tells the story of this battle from many perspectives. A Turkish farmer, a Melbourne Railway worker, a Durham coal miner, an Irish poet, and a Taranaki farmer.

‘On television, history is no longer just history; it is ‘living history’. The story of Gallipoli, though inherently dramatic, was brought vividly to life. One thing that television history can do with some effort, and which this documentary did well, is to give the sense of a mindset of a time. At times it was a little like a Shakespeare play.’ — Irish Times

Three presenters, an Australian, Dr Peter Stanley, a Turk, Savas Karakas, and an Irishman, Prof. Keith Jeffery, roam the battlefields and tell us the stories of what happened here. Together with a unique three dimensional system of maps and photographs and the extraordinary words and images of the young men who fought here, Revealing Gallipoli brings the battle alive.

First-hand accounts tell what Gallipoli looked, felt, and smelled like, and remarkable 3D archival images bring these scenes to life. Animated maps illustrate the forbidding terrain the soldiers faced, and illuminate the strategies behind the conflict.

The program follows the campaign as it unfolded, from its very beginnings at the War Council of London, through to the ensuing naval attack, the landings and the failure nine months later, when Allied troops silently withdrew in a night of Turkish winter.

‘On the eve of the annual observance of defeat made glorious by heroes, this his conspicuously honest film is a detailed, absorbing chronicle, a compelling examination of the Gallipoli campaign.’ — Sydney Morning Herald. Show of the week

‘A marvellous documentary that captures the gravity of the tragedy with intelligence and a gratifying lack of parochialism. Unlike many contemporary military documentaries that seek to bring alive their subjects by resorting to empty re-enactments and computer generated trickery, Revealing Gallipoli has the confidence to rely on well grounded research and the power of the spoken word. A fine televisual achievement.’ — The Age

‘It is impossible not to get caught up in the raw emotion of this story and wonder at the callousness of the high command and the bravery of their men. This is a brilliant compilation of a battle featuring both sides of the conflict. The canvas for this story is massive and the writer has brilliantly brought the drama into sharp focus to capture a depth of heroism and the tragedy on both sides. The narration is particularly fine.’ — Queensland Premiers Literary Awards

Some people say Gallipoli is full of ghosts, and I think that depends on what you think ghosts will do. At Gallipoli they don’t leap out at you and say boo. If there are ghosts here, they’re in the morning mists lightly touching the hilltops and gathering more thickly in the gullies and hollows. The mist grumbles and shuffles as a line of heavily laden men might grumble and shuffle. The rising sun burns off the mist and before me, like a rude shock, two thighbones lie in the dirt. There aren’t any ghosts here, only the thighbones of a young man half my age, and closer in years to the age of my ten-year-old son.

A great multinational force lands in Turkey on April 25, 1915. This force is to secure the Dardanelles so British and French battleships can steam right into downtown Istanbul, and knock Turkey out of the Great War. The Turks defend their homeland. They fight ferociously.

Gallipoli is a good plan. It could work. But it is a plan cobbled together, under-equipped, under-manned and poorly commanded. The battle is a tragedy. It lasts nine months.

For Australians and New Zealanders, Gallipoli is seen as a founding event in the story of their nation. So too the Turks. The Irish have reasons to not remember the battle ever took place, and the British, they forget a battle dwarfed by a bigger slaughter closer to home.

Making Revealing Gallipoli was a daunting task. One doesn’t approach a legend lightly. Behind the legend is a story of ordinary young men in extraordinary circumstances.

Making the film was an opportunity to tell their stories, and that of the battle they fought in the land where the legends began, a place where old thighbones belonging to young men still stick from the earth. Still shock.

‘This docudrama script demonstrates the writer’s ability to delve into our nation’s history and present us with an imaginative interpretation of events that is resoundingly authoritative. The story of Gallipoli has been told countless times, to the point where it has been etched into our national psyche. But what really happened? What were the disastrous and often insane decisions that led to this tragedy? Who were the soldiers that paid the ultimate price for this folly? What did they think, what did they feel, what did they understand about what was happening? These and many other questions are explored and answered in Wain Fimeri’s innovative work.’ — The Village Roadshow Prize for Screen Writing